George bloody Galloway, eh? How is it that the hard left and their friends the raving Islamofascists (the ones who got Oona King out for being Jewish despite being anti-Iraq war) still think this guy is so great? Even after he showed routine adoration for a man who repressed and killed hundreds of thousands of his fellow Muslims?
This is a man about whom even the Beeb say:

"...many will greet his performance with a wry smile and claim that, like others before it, it was just that - theatre designed to obscure fact with rhetoric and declamation."

They are referring back to Galloway's absurd appearance before the investigations subcommittee of the US Senate Homeland Security and Governmental Affairs Committee in which he was accused of receiving Iraq oil kickbacks from Saddam Hussein under the UN oil-for-food programme. He managed to obfuscate his way out of that one, as no trace of funds directly to him could be found. However, plenty of questions were raised - and remain largely unanswered - about how such a die-hard Commie can afford the kind of extravagant lifestyle he leads, with his big cigars and villa in Portugal.

All the meanwhile, he takes pride in channeling funds to an organisation proscribed by the US Treasury Department as a 'Hamas-related charity' and designated 'a Specially Designated Global Terrorist', and now this latest scandal.

It is about time that the so-called moderate Muslim community and the hard left disowned this creep. All the while he has been trumpeting your causes whilst funding the kind of extremism that wants to wipe you off the planet for being liberal, feminist, pro-homo, not wearing a shroud to go shopping, meeting and falling in love with future spouses once aged 18+ and other shocking immoral behaviour. Fortunately it's the Jews' turn for a massacre first (it always is), so you have a few years... 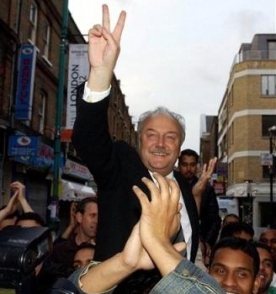 Hopefully, the next time Mr Galloway is hoisted aloft by a crown of cheering Muslims, it will involve a noose.
Posted by freedmanslife at 8:11 pm