In early memory
Mission music
Was ringing 'round my nursery door
I said take this child, Lord
From Tucson, Arizona
Give her the wings to fly through harmony
And she won't bother you no more
After a hefty breakfast at Hippo Hollow, I made the long drive back down the N4 to Johannesburg, arriving just in time for the end of the opening ceremony and a massive braai at M&J's place. We watched the first game together while scoffing chops, chicken and boerewors. SA didn't completely embarrass themselves, and Tshabalala's goal was a masterpiece, but Mokoena's shambolic decision not to move up with the rest of his defenders cost them a cheap equaliser. It was clear (other than to the myriad people who had clearly never actually watched a footy match before) that they were going to struggle to get out of the group, let alone win the tournament as some people on crack had been suggesting.
Thus began a glorious few weeks of up to 4 matches a day to enjoy. I say "enjoy", as at that point I had not had to sit through 360 minutes of England playing. The first instalment of this utter misery was the following day, when we headed 90 mins north-west to Rustenburg, which is about as unattractive as it sounds. Before we went into the ground, there was a buzz of anticipation, mostly among people who are drunk at most England games and people who had never been to an England game.
I swiftly set about crushing the hopes of any young England fans in the vicinity by pronouncing that they would play great footy for 15 mins, score a nice goal too early, and spend the rest of the game on the back foot before conceding a comical equaliser. Now why on earth did I not put money on that?
The Royal Bafokeng Stadium is pretty horrible - reminiscent of a dodgy UK council athletics track with broken signboards, catering that consisted totally of watery hot dogs, and some concrete stands that are too shallow to allow any decent perspective. This was in fact so bad that the advertising hoardings blocked our view of the goal line, so when Dempsey hit a tame shot, it looked like Rob Green had got down comfortably and saved it, until suddenly people started cheering. Lame.
Oh and the sodding vuvuzelas. Like having bees actually build their hive in your skull.
On the Sunday I headed to OR Tambo and ensconced myself in the BA lounge, which is surprisingly delightful, and looks after the funny little mini-BA operation that runs in South Africa. Top marks for the cheese cake and some excellent triple-distilled local brandy which I supped whilst lounging on a nice sofa watching Ghana continue the trend of Africans who promise much but never seem to finish anything off. At football. Not making a general slur here.
One courtesy upgrade (classic BA trick of moving the curtain back one row and leaving the middle seat empty) later, 2 hours of light snacking, and I landed in Cape Town where Dr Blond awaited. But what is this? Pissing rain? I did not sign up for that.
Luckily it did clear up for a scenic drive up Table Mountain:

A week in Cape Town passes pretty quickly, especially in the esteemed company of one of the great Jewish theologian-philosophers of our generation: 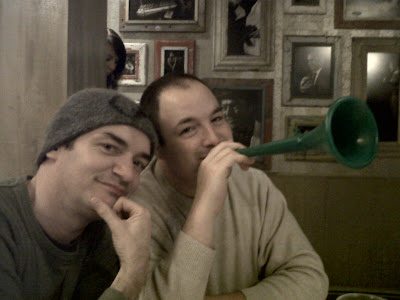 Or at least that's what Dr Blond said to me when I left.
I fitted in all the standard stuff - Robben Island, Waterfront, drive along the bays down to Cape Point with the delicious Vanessa, via some serious prawnage at Hout Bay, and back via some rather odd fish and chips at Kalk Bay, mooch around Long Street on game night, and hang out in Italian bars with Knuffelgirl: 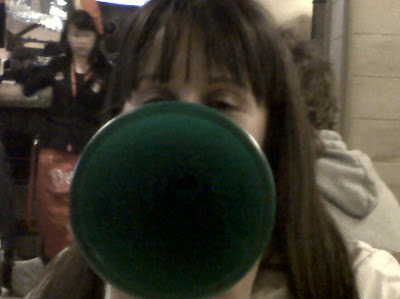 Cape Town has that same blessing as Sydney - topographical porn. It just never gets boring when from almost any vantage point, there is a delightful combination of rugged coastline and jagged mountain to look at. Much the same as Joburg, I felt pretty unthreatened most of the time, with the most tense moment being at the end of the dreary England-Algeria game, when some England "fans" near us set upon a guy wearing a clown wig that they didn't find very amusing.
Particular culinary mentions need to go out to Dr Blond's amazing soup, the kilo of prawns at Hout Bay, and a sweet restaurant, wine bar and boutique hotel complex, the Cape Heritage Hotel. After a week of such delights, I waddled into the car and headed out for what is known as the Scenic Route via a late afternoon potter through Stellenbosch (wine heaven) and Franschhoek (food heaven).
I wound up at about 10pm in Swellendam, staying at a quaint and rather lovely B&B called The Hideaway. I stayed in the Queen Elizabeth Suite, complete with four-poster bed (pre-warmed by my lovely hostess), Cadbury's hot chocolate, and a jar of the most spectacular home-made shortbreads. In the morning I stumbled out of bed to a sumptuous mountain view, and took breakfast overlooking the lawn with a nice couple who were FCO bods based in Cairo but pretty much wishing they were in Tel Aviv.
The Garden Route officially begins just east of Swellendam at Heidelberg, and there begins Part 4 of Shongololo's African Adventure...
(a-wa) o kodwa u zo-nge li-sa namhlange
(a-wa a-wa) si-bona kwenze ka kanjani
(a-wa a-wa) amanto mbazane ayeza
She's a rich girl
She don't try to hide it
Diamonds on the soles of her shoes
He's a poor boy
Empty as a pocket
Empty as a pocket with nothing to lose
Sing ta na na
Ta na na na
She got diamonds on the soles of her shoes
She got diamonds on the soles of her shoes
Diamonds on the soles of her shoes
Diamonds on the soles of her shoes
Posted by freedmanslife at 10:01 pm