After an excellent breakfast in Swellendam, I took the recommendation of the local tourist office and headed off through the magnificent Tradouw Pass...

... and down the Scenic Route (R62), rather than the official Garden Route (N2). This mainly allowed me to avoid most of the tourists, grab a little picnic lunch at a nice country park, and take in some serious port-tasting  at Boplaas in Calitzdorp.

Following that, and needing to soak up a bit of alcohol before continuing, I forced down a couple of mugs of decent coffee with a huge icing-rich slab of cake at a very nice little cafe nearby. Oddly, there was a full-size snooker table in this cafe, so I moseyed in to see if anyone fancied a frame. Now I haven't played snooker for about 2 years, since beloved Wifey #1 buggered off to Melbourne. And it didn't help that the one guy who was there happened to be an ex-pro! I kept the score down to a respectable 40 point loss, though I suspect he was going easy on me.

Now fully sober, I got back on the road and headed to the Robinson Pass. Now this is one spectacular piece of road:

I got the timing right, and made it through the pass as the sun was starting to set, meaning a panoply of fabulous colours and glorious views (snapped with my phone camera on the move)...


I pulled into Mossel Bay in the early evening, and chuntered up the ludicrously steep hill to the Bar-T-Nique Guest House, where I had a vast room with great bay views. I pottered down into town for a bite to eat at a local pub, watched some sport, played some pool with the local talent, and conked out. Next morning, a vast spread for breakfast, set in an atrium overlooking the bay, then off on the main stretch of the Garden Route.

Some pesky work issues arose, so I drove into the rather dull town of George and found a very nice cafe with wifi, where I got a couple of hours of emails in, whilst wolfing down a decent spinach and feta crepe, before finding the lovely little "old road" from George to Knysna, which winds its way out of the back of the town, around some hairy little bends and over minuscule Brio bridges, before dropping back down through the Wilderness National Park lagoons to rejoin the N2.

I had timed my run so I could get to Knysna in time for a little stroll around and to watch the South Africa vs. France match, which SA needed to win by 3 or so clear goals to have any chance of going through. The French had managed to have a massive sulk the day before, and were in total disarray, but the Saffers showed about as much competence in front of goal as Emile Heskey. So they went out, but at least it was with a win.

From there, it was a simple drive up to Plettenberg Bay, where I was staying at the quite incredible Aquavit. Again I had a cavernous sea view room, and the hosts were utterly charming and urbane, greeting me at the door with a goblet of decent wine and recommending a phenomenal place for dinner, Emily's, which was off a small path off tan unbeaten track off the beaten track.

After a great night's sleep in their super-king-sized bed, and a heck of a breakfast on the terrace, I was back in the car and zooming towards Port Elizabeth in time for the 4pm kick-off of England vs. Slovenia. I had time to take in the lovely Storms River, the world's highest bungee jump, and this bizarre bridge to nowhere: 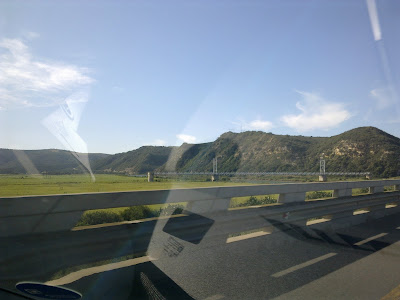 Arriving in PE, I had time for a quick drive around the town centre, which is quite attractive for the most part, then headed out to King's Beach where I met AJ and we took a spot of lunch before jumping on a shuttle bus to the game. Suffice to say there were no real highlights to speak of - England were better than they had been against Algeria but still not setting the world on fire, and the thing that cheered me up the most in the stadium was this flag belonging to the "Gants Hill Hammers": 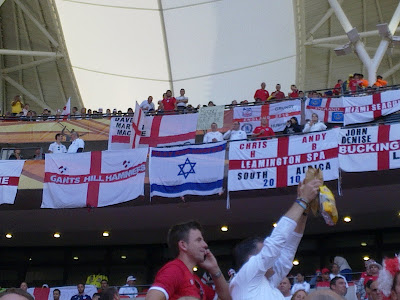 About as close as Israel got to this World Cup...

After the match, we enjoyed a couple of swift Windhoek Lights before AJ headed back out to the Grahamstown Festival and I got on a plane from PE to Joburg. Needless to say, use of the lounge was a necessity, not least because the entire airport was littered with the paralytic bloated human detritus that accompanies the England football team (or do I mean IS the England football team?) wherever they travel. I literally had to step over one such corpse to get into the lounge.

Several rounds of buffet and port later, and I settled into my front row seat (low-cost was the only option here, it was as good as I could do to slip the check-in girl 50 rand for that and keeping an empty seat next to me). Then a cacophany of "it's coming home, it's coming home, it's cooooooming!" as David Baddiel himself sheepishly boarded the plane. And indeed it would all come home only too soon, but that is for the final chapter of Shongololo's African Adventure. Stay tuned.

Posted by freedmanslife at 4:44 pm